Possible or impossible? When it depends

A lot in terms of WWII allied stars, was done even by “free format” and / or lost by interpretation in field orders and memo’s top down, from command to captain, sergeant, corporal to the soldier who had to paint a vehicle.
Except that where consisted “guidelines” introduced by the allied troops like the 1942 US Army – AR 850-5 and some harder to find Commonwealth manuals. 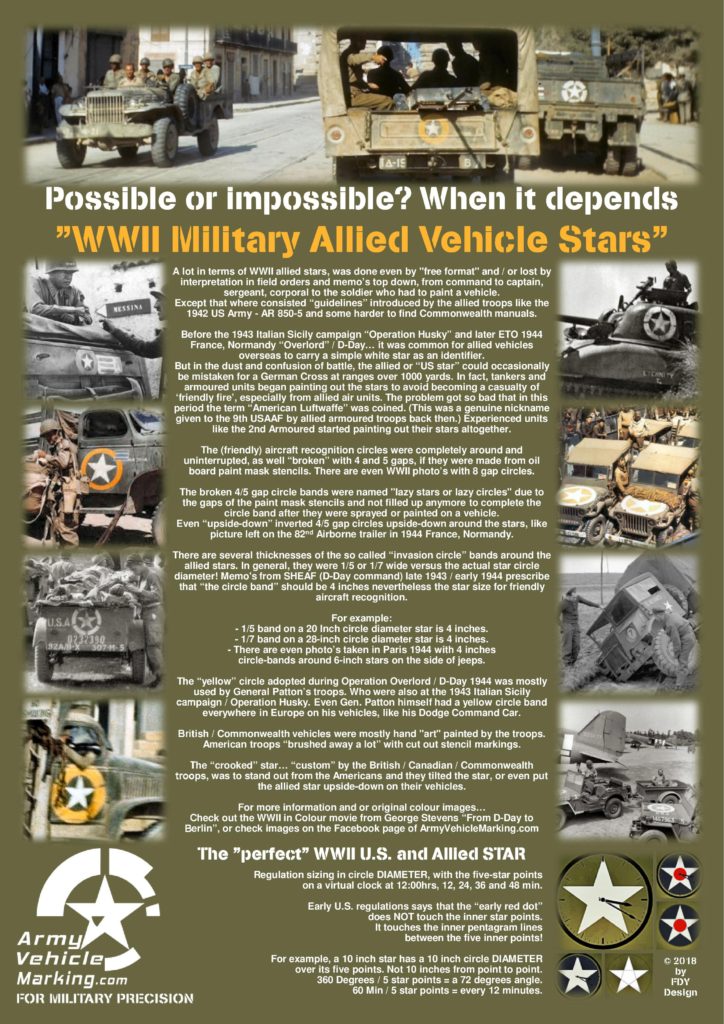 Before the 1943 Italian Sicily campaign “Operation Husky” and later ETO 1944 France, Normandy “Overlord” / D-Day… it was common for allied vehicles overseas to carry a simple white star as an identifier.

But in the dust and confusion of battle, the allied or “US star” could occasionally be mistaken for a German Cross at ranges over 1000 yards. In fact, tankers and armoured units began painting out the stars to avoid becoming a casualty of ‘friendly fire’, especially from allied air units. The problem got so bad that in this period the term “American Luftwaffe” was coined. (This was a genuine nickname given to the 9th USAAF by allied armoured troops back then.) Experienced units like the 2nd Armoured started painting out their stars altogether.

The (friendly) aircraft recognition circles were completely around and uninterrupted, as well “broken” with 4 and 5 gaps, if they were made from oil board paint mask stencils. There are even WWII photo’s with 8 gap circles.

The broken 4/5 gap circle bands were named “lazy stars or lazy circles” due to the gaps of the paint mask stencils and not filled up anymore to complete the circle band after they were sprayed or painted on a vehicle.

Even “upside-down” inverted 4/5 gap circles upside-down around the stars, like picture left on the 82nd Airborne trailer in 1944 France, Normandy.

There are several thicknesses of the so called “invasion circle” bands around the allied stars. In general, they were 1/5 or 1/7 wide versus the actual star circle diameter! Memo’s from SHEAF (D-Day command) late 1943 / early 1944 prescribe that “the circle band” should be 4 inches nevertheless the star size for friendly aircraft recognition.

The “yellow” circle adopted during Operation Overlord / D-Day 1944 was mostly used by General Patton’s troops. Who were also at the 1943 Italian Sicily campaign / Operation Husky. Even Gen. Patton himself had a yellow circle band everywhere in Europe on his vehicles, like his Dodge Command Car.

British / Commonwealth vehicles were mostly hand “art” painted by the troops.
American troops “brushed away a lot” with cut out stencil markings.

The “crooked” star… “custom” by the British / Canadian / Commonwealth troops, was to stand out from the Americans and they tilted the star, or even put the allied star upside-down on their vehicles.

For more information and or original colour images…Check out the WWII in Colour movie from George Stevens “From D-Day to Berlin”, or check images on the Facebook page of ArmyVehicleMarking.com

Early U.S. regulations says that the “early red dot” does NOT touch the inner star points.
It touches the inner pentagram lines between the five inner points!